It’s hard to imagine that there is something Freya Levy has turned that she hasn’t excelled at, judging by what she’s already achieved in the athletic world.

A county-level football and rugby player before being diagnosed with muscular dystrophy, the 25-year-old has since represented Great Britain in wheelchair basketball and para-ice hockey.

Since 2018, Levy has also played in the wheelchair rugby league and will become a full-fledged international in a third sport on Wednesday night when she takes to the pitch for England’s first of two tryouts against the France at Medway Park in Gillingham.

“A family friend had a game and they needed more players,” said Levy, recalling his wheelchair rugby league debut. “They knew I was playing basketball and could compete on a chair.

“So they asked me to come over and I tried and I really fell in love. It’s kind of picked up from there.

“Tactics was probably the hardest thing to learn – I’m a southerner and a bit used to union, so I definitely had to learn a lot of skills for the rugby league.

“I found it quite easy to fit into it, but obviously it gets harder at this level, so I’m really up for the challenge.”

Since also discovering a talent for the game, Levy has become one of the stars of the Kent-based Argonauts team, which reached the Wheelchair Challenge Cup final this year.

Part of the reason she made the transition so successful comes from the intersection of skills learned in basketball and ice hockey, the latter for which she has big ambitions.

“It’s incredibly physical and getting a women’s program is pretty new,” said Levy, who still combines his basketball and ice hockey ambitions with those of the rugby league. “So we hope to incorporate that into the Paralympic Winter Games in the future.

“It’s great to be able to represent my country in so many sports and with that, to be able to promote lesser known sports like para ice hockey to encourage more women to get involved. 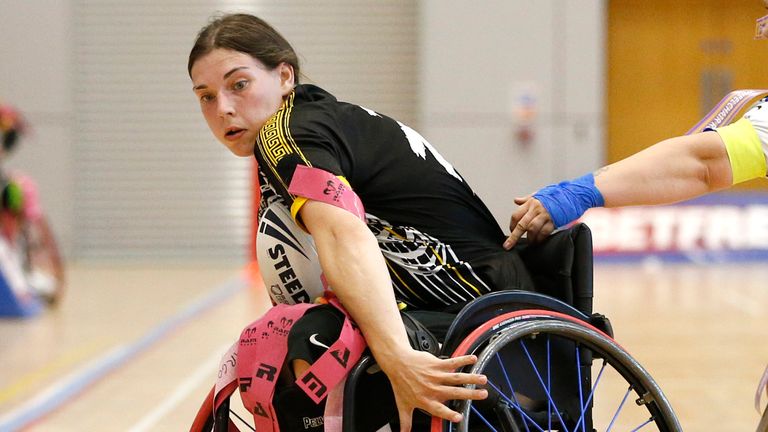 I found it quite easy to fit into it, but obviously it becomes more difficult at this level so I’m really up to the challenge.

“Also, we’re playing with two sticks, so it helps with hand-eye coordination, being ambidextrous, and being able to compete on a level playing field with my right hand and my left hand.”

Levy is one of four Argonauts players to be called up for matches against France, joined in the England squad by teammates Joe Coyd, Fred Nye and Lewis King,

National team head coach Tom Coyd has praised the club for the rugby league education it has received and is impressed with how quickly it has progressed – and not just because it correctly refers to the indoor playing area used by the league’s wheelchair variant as a court rather than a court.

“The first thing to say about Freya is that she is clearly multi-talented and that means she acquired the wheelchair rugby league incredibly quickly,” said Coyd.

“His chair skills are fantastic – like some of the best on the team. It was just about giving him time to understand the game.

“I think her first session was in October, and so far all of her training in the wheelchair rugby league has been playing for the Argonauts. She picked it up as soon as she joined. the team, really. “

In addition to pursuing his own sporting ambitions, Levy works in collaboration with the foundation created by iconic Olympic sprinter Michael Johnson to offer everyone in his region the opportunity to access sport.

Since the wheelchair rugby league is contested by mixed teams and disabled and able-bodied players compete against each other on an equal footing, she could hardly think of a better sport to participate in from that perspective.

“Not only can capable and incapable players compete, but also men and women, so it’s amazing to be a part of it,” said Levy.

“I grew up with two brothers so I’m used to playing with guys and I’m really, really excited.”

Teams for this week’s matches