AMHERST, NS – Since meeting the Amherst Ramblers three years ago, a young hockey player from Oxford has sort of become an adopted member of the team.

And when 11-year-old Brody Kouwenberg was diagnosed with COVID-19 in November, the team was quick to respond.

“When our team president Ron Lake told me about Brody, we knew we had to do something to show him we thought about him,” said Ramblers general manager Jeff LeBlanc. “We had the idea to have the boys make a video and send him a card to try to cheer him up. We know he was pretty sick and struggled with it.

Kouwenberg has seen more than his fair share of hospitals in his short life.

He was born with complete fetal heart block, a disorder of the heart’s electrical system that controls the rate and rhythm of the heartbeat. Heart block occurs when there is a disturbance, preventing the electrical signal from the upper chambers of the heart from reaching the lower chambers, or ventricles.

After being told he would never play hockey, Kouwenberg is now in his fourth hockey season with the Cumberland County Minor Hockey Association, which has made him an inspiration to other young players. hockey, including those of the Ramblers.

“He means a lot to us as a team,” said LeBlanc. “It was Joël (Goguen) who brought him to us when he was in the team. When we learned what he had been through in his life and how he fought to play hockey, it really inspired us, and the fight he fought against COVID is another example of the warrior he is. We hope he will recover completely.

“When you have your own kids, when you hear stories like Brody’s, it really hits you,” LeBlanc said.

“You look at a child and what he’s going through, you think about what you would do if it was your child who was going through this. It’s quite emotional. What he went through, no one should have to go through. It is a model of resilience and daily combat. It is a testament to the strength of this child and his upbringing.

He said it wasn’t hard to get the other guys to do something to help him.

“We wanted to do something to make him smile and help him in his fight with COVID,” said Bartholomew who thinks Brody’s fight to overcome his heart disease is inspiring. “He’s a huge fan and every time I see him he always has a big smile on his face. It’s great to see him get better. It’s hard to see young children going through something like this. 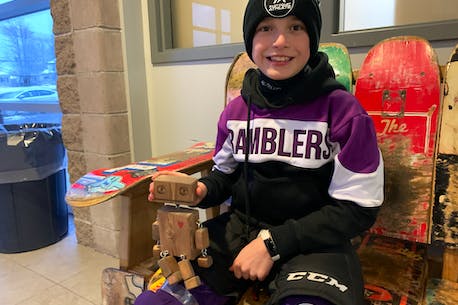 A few seasons ago, Kouwenberg thanked the team by introducing them to one of his homemade wooden robots which he calls Bro-Bots.

Later that season, Goguen placed the image of Bro-Bot on his goalie mask.

When Goguen heard about Kouwenberg’s fight with COVID, he felt he had to do something.

“Jeff (LeBlanc) messaged the alumni telling us about Brody’s condition and I wanted to do something to help,” said Goguen.

“He’s a tough kid and a fighter,” he said. “I just told him to keep fighting.”

Goguen said he keeps in regular contact with the Kouwenberg family and has spoken to Brody on several occasions to get updates on how he plays minor hockey.

Although he was never hospitalized, Kouwenberg’s mother Jennifer said Brody was very ill with a high fever, cough and loss of energy.

She continues to be in regular contact with the IWK Children’s Hospital in Halifax as she wears a pacemaker and because COVID can be extremely hard on the heart.

He returned to minor hockey in December after being away for a month, but his mother said he still hasn’t become himself again.

He still has a long convalescence ahead of him.

“It took her a long time,” she said. “He was a sick boy. It was great what they did for him. He was completely amazed. He was speechless.

She said it’s amazing what the team has done for Brody, adding that they are a very caring and caring group of hockey players.

“They should know that they made a difference in the life of a young boy. I know Brody will never forget them,” she said.

“It’s great to have a group of older teens taking the time to talk to a younger child. It is worth celebrating. We often overlook the positive things that hockey brings.