“Trying to Win a Hockey Game”

The New York Rangers are conducting their breakup day talks with the media. Of course, the main topic on everyone’s mind was Kaapo Kakko’s scratch in Game 6 against the Tampa Bay Lightning?

“Trying to win a hockey game. I just dress my roster,” Gerard Gallant said on the team’s YouTube channel. “When we sit down and talk about our roster, that’s what we do. We like the kid, he’s a good young player but we thought he was the best formation to win this game.

Controversy escalated when Ryan Strome, who was suffering from a lower body injury, was unable to complete the contest. This made the decision to dress rarely used Dryden Hunt for the fourth line on Kakko extremely perplexing.

“It’s not about his game. It’s about the team play and the lineup,” added Gallant. “We had a game time decision, so that’s how we came up with it. We weren’t sure what the lineup would be during the warm-up.

After the loss, Gallant declined to comment on his decision, saying now was not the time to discuss the roster change.

This led to several days of speculation about what the future holds for Kakko, who is an RFA. It’s uncertain whether Gallant’s comments today will quell talk of a trade or an offer sheet. That clarity will have to come from President and CEO Chris Drury.

Kakko, 21, had 18 points in 43 games but was on the injured list three times. In three years of career, he managed only 58 points in 157 games. Without salary arbitration rights, the Rangers have all the leverage. A 2-year bridging deal around $2 million AAV is the most likely outcome.

At this price, he is a cheaper option than trying to re-sign Frank Vatrano to play in the top six on the right wing. The 28-year-old just signed a three-year contract worth $2.53 million AAV and should easily fetch over $3.5 million on the open market as an unrestricted free agent on July 13.

The only real concern for Rangers is a potential offer sheet, similar to the big one-year contract given to Jesperi Kotkaniemi by the Carolina Hurricanes to steal him from the Montreal Canadiens.

This kind of movement is not without risk. Kotkaniemi was also extended 8 years at $4.82M AAV and has struggled offensively this season with just 29 points in 66 games. This is a very difficult ceiling to hit if Kotkaniemi doesn’t start producing better numbers.

According to NY Post’s Mollie Walker, she estimates the number to force Rangers not to match an offer sheet with Kakko would be between $4.2 million and $6.3 million.

That’s why I think Kakko is staying with Rangers.

Moreover, Gallant dropped a hint when asked if the line of children of Alexis Lafrenière, Filip Chytil and Kakko would be back next season if he would keep them together.

“They will all come back,” he said.

UPDATE: Kaapo Kakko says the scratch has no bearing on contract negotiations. 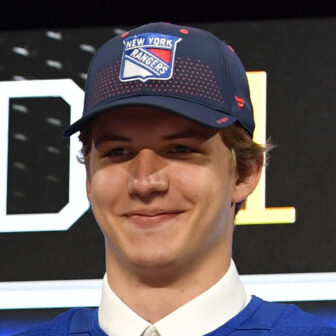